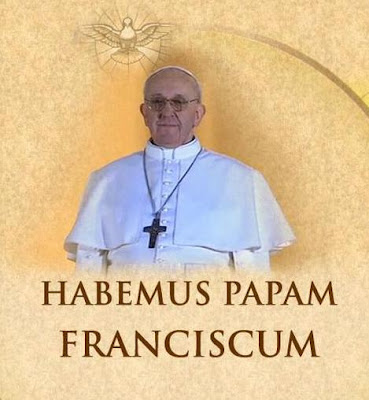 Brothers and sisters good evening.
You all know that the duty of the Conclave was to give a bishop to Rome. It seems that my brother Cardinals have come almost to the ends of the earth to get him… but here we are. I thank you for the welcome that has come from the diocesan community of Rome.
First of all I would say a prayer pray for our Bishop Emeritus Benedict XVI.. Let us all pray together for him, that the Lord bless him and Our Lady protect him.
Our Father…
Hail Mary…
Glory to the Father…
And now let us begin this journey, the Bishop and people, this journey of the Church of Rome which presides in charity over all the Churches, a journey of brotherhood in love, of mutual trust. Let us always pray for one another. Let us pray for the whole world that there might be a great sense of brotherhood . My hope is that this journey of the Church that we begin today, together with help of my Cardinal Vicar, be fruitful for the evangelization of this beautiful city.
And now I would like to give the blessing, but first I want to ask you a favour. Before the bishop blesses the people I ask that you would pray to the Lord to bless me – the prayer of the people for their Bishop. Let us say this prayer – your prayer for me – in silence.
[The Protodeacon announced that all those who received the blessing, either in person or by radio, television or by the new means of communication receive the plenary indulgence in the form established by the Church. He prayed that Almighty God protect and guard the Pope so that he may lead the Church for many years to come, and that he would grant peace to the Church throughout the world.]
[Immediately afterwards Pope Francis gave his first blessing Urbi et Orbi – To the City and to the World.]
I will now give my blessing to you and to the whole world, to all men and women of good will.
Brothers and sisters, I am leaving you. Thank you for your welcome. Pray for me and I will be with you again soon.
We will see one another soon.
Tomorrow I want to go to pray the Madonna, that she may protect Rome.
Good night and sleep well!
Biography of Pope Francis I
Pope Francis (Latin: Franciscus; born Jorge Mario Bergoglio on 17 December 1936 in Buenos Aires, Argentina) is the 266th[1] and current Pope of the Catholic Church, elected on 13 March 2013. In that role, he is both the leader of the Catholic Church and Sovereign of the Vatican City State. From 1998 until his election as pope, he served as the Archbishop of Buenos Aires, and was elevated to Cardinal in 2001 by Pope John Paul II. Pope Francis speaks Spanish, Italian and German fluently
Early life

Jorge Bergoglio[3] was born in Buenos Aires, one of the five children of Italian immigrants, railway worker[1] Mario Jose Bergoglio and Regina Maria Sivori, a housewife.

He received a master's degree in chemistry at the University of Buenos Aires, and then studied at the seminary in Villa Devoto.[4] He entered the Society of Jesus on 11 March 1958. Bergoglio obtained a licentiate in philosophy from the Colegio Máximo San José in San Miguel, and then taught literature and psychology at the Colegio de la Inmaculada in Santa Fe, and the Colegio del Salvador in Buenos Aires.[5]

He was ordained to the priesthood on 13 December 1969, by Archbishop Ramón José Castellano. He attended the Facultades de Filosofía y Teología de San Miguel (Philosophical and Theological Faculty of San Miguel),[6] a seminary in San Miguel, Buenos Aires. Bergoglio attained the position of novice master there and became professor of theology.

Impressed with his leadership skills, the Society of Jesus promoted Bergoglio and he served as provincial for Argentina from 1973 to 1979.[7] He was transferred in 1980 to become the rector of the seminary in San Miguel where he had studied. He served in that capacity until 1986. He completed his doctoral dissertation in Germany and returned to his homeland to serve as confessor and spiritual director in Córdoba.[5]

Bergoglio succeeded Cardinal Quarracino as Archbishop of Buenos Aires on 28 February 1998 and was concurrently named ordinary for Eastern Catholics in Argentina, who had lacked their own prelate.

At the consistory of 21 February 2001, Archbishop Bergoglio was created a cardinal by Pope John Paul II with the title of cardinal-priest of San Roberto Bellarmino. As cardinal, Bergoglio was appointed to several administrative positions in the Roman Curia. He served on the Congregation of Clergy, Congregation for Divine Worship and the Discipline of the Sacraments, Congregation for Institutes of Consecrated Life and Societies of Apostolic Life. Bergoglio became a member of the Commission for Latin America and the Family Council.

As cardinal, Bergoglio became known for personal humility, doctrinal conservatism and a commitment to social justice.[9] A simple lifestyle contributed to his reputation for humility. He lived in a small apartment, rather than in the palatial bishop's residence. He gave up his chauffeured limousine in favor of public transportation,[10] and he reportedly cooked his own meals.